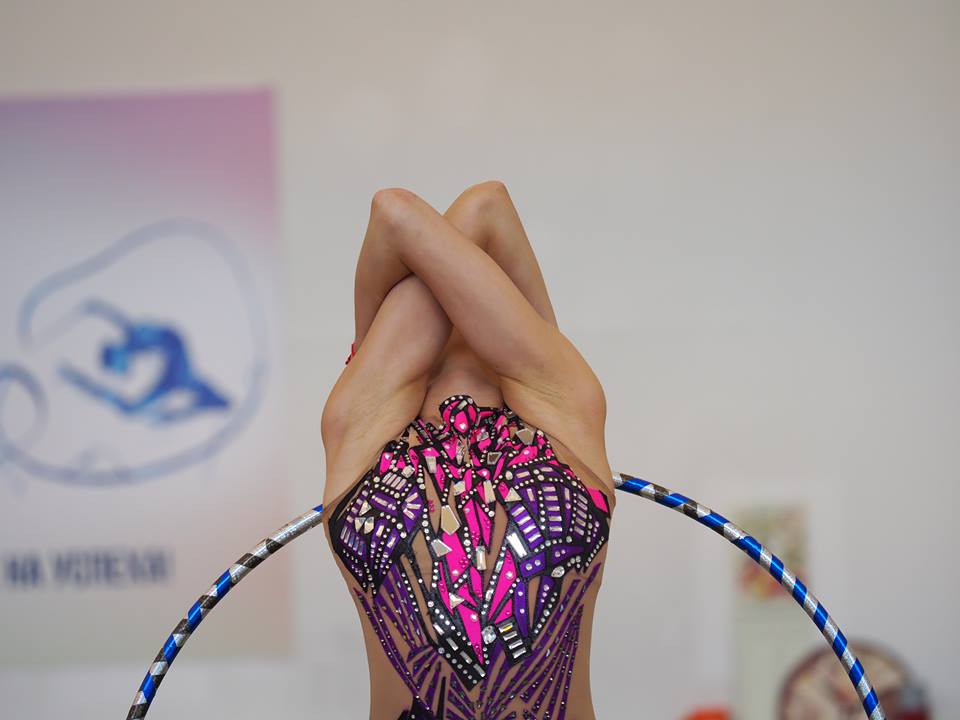 The Bulgarian national team of rhythmic gymnastics showed their new routines at the first control training of the year. The only ones kept from last season are Boryana Kaleyn’s hoop and Petya Borisova’s clubs. In front of a quite a big audience, Branimira Markova presented her gymnasts. Among the judges were Maria Gigova, Maria Petrova, Filipa Filipova, Maria Kuncheva, Rossina Atanassova, Savina Gancheva and Rada Vrazheva.

We are left with the impression of many various routines, chosen according to the temper of the girls. Of course, Bulgarian music is also present in almost everyone’s exercises, mainly since Sofia is welcoming the World Championships this fall. Since it’s so early in the year, there were some mistakes made with the apparatus and the body difficulties.

Neviana Vladinova has a small injury in her knee, which she has already recovered from, but was advised by coaches to not do some of her pirouettes and leaps. That didn’t allow her to perform like she wanted, but nevertheless, she showed some great routines. We can say from now that her new ball is going to be this season’s hit. The music is chosen to be a crowd-favorite, the accents being very well marked by the choreography. „I love all my routines, but for now the ball is my favorite. Brani sent me the music almost jokingly, but I really liked it and that’s what we chose“, said Nevi. The lyrical, tear-jerking routine this year is her ribbon – to the tune of our very favorite „Yovano, Yovanke“ by Slavi Trifonov. Those are her two composition to music with words. Her hoop and clubs are very dynamic and we’re warning you: they’re no less heart-stopping.

The best performer today was Katrin Taseva, who won the control training and also has 4 new routines. About her, the president of the Bulgarian RG federation said: „Katrin surprised us with her performance, we didn’t expect it from her. I’d like to congratulate her about today, but she has a task and until she accomplishes it, she won’t compete in any big tournaments“. Katya’s bulgarian routine is a hoop to „Camino“ by Lili Ivanova. Her clubs are extremely dramatic and dynamic, a very dance-y ribbon to a Bruno Mars hit we all know and love and a jazz ball with a lyrical beginning.

„Boryana Kaleyn and Erika Zafirova are in a much better shape than the one they showed today“, said Raeva. Boryana’s strongest routine today were her new clubs. Her hoop is the same as last year – the first bulgarian routine in the new CoP which received a score of over 18. Her new compositions are truly excellent – the ball is trilingual (english, italian and bulgarian), sang by Mariana Popova and Orlin Goranov. The clubs and ribbon are very promising, difficult and suiting her temper.

Erika’s BDs didn’t turn out like we’re used to seen them, but a noticeable change is her improved ribbon technique. She also has 4 new exercises. This year there’s no gypsy music for her, but a new, more modern style. Petya Borisova showed a way more stable performance, compared to previous control trainings.
From the reserve team, we already saw Galateya Gerova and Marina Ivanova at Asker Cup, but they looked quite stable, with the exception of one routine each, where they did some mistakes. Yoana Nikolova and Bilyana Pisova didn’t participate, because they’re with the flu.

January 31st we’ll see the group’s new routines which we excpet to be spectacular, and on Feb 14th there will be an official control training in Arena Armeec for the entire national team.