Irina Deriugina: Vlada should have been selected for the Olympics 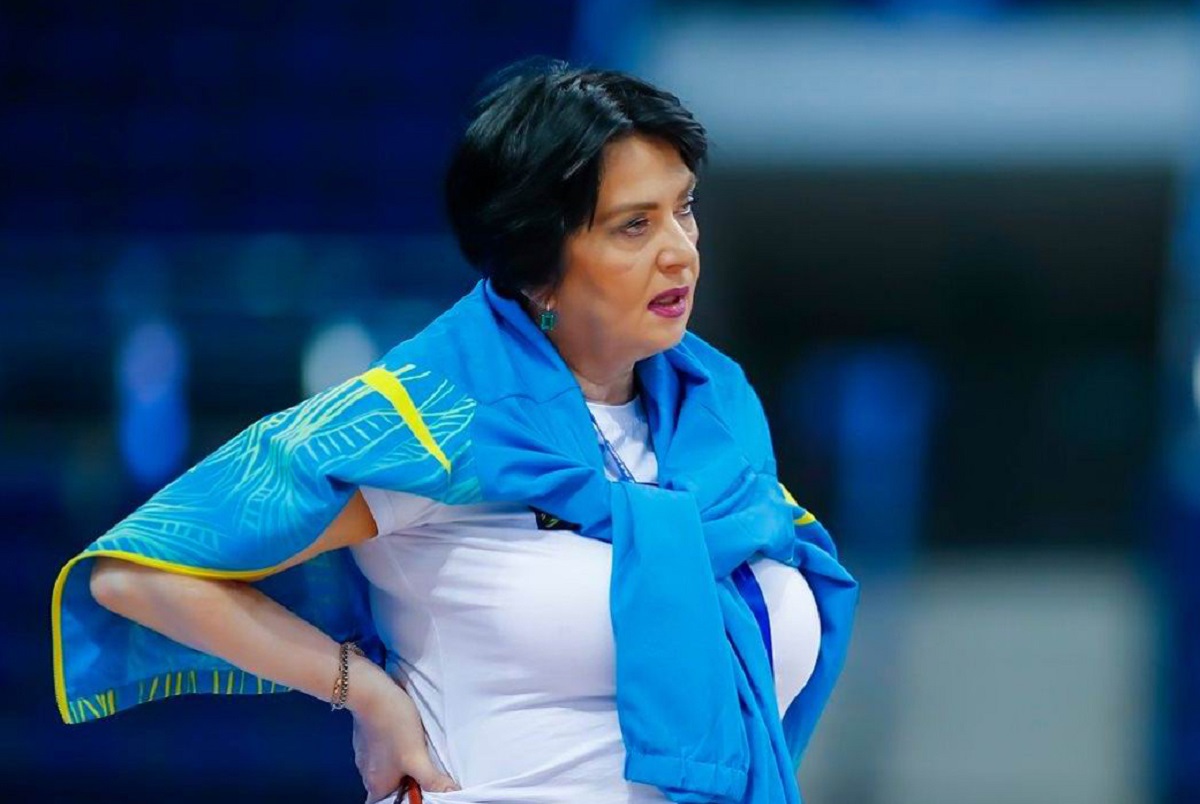 The president of the Ukrainian Rhythmic Gymnastics Federation and head coach of the national team Irina Deriugina gave a lengthy interview on the Ukrainian national TV channel’s Olympic studio program, on the eve of the team’s departure for the Games in Tokyo. In it, she explains why she believes Vlada Nikolchenko, who announced her temporary retirement just last night, should have been one of the two individual gymnasts selected for the Olympics, as well as how the illness of team member Valeriya Yuzvyak affected the group. Co-host of the program is the 2013 hoop World Champion and 2016 Olympics Bronze medalist Anna Rizatdinova.

Irina Deriugina: I’ll start with the group because the last year and a half have been just awful. The team lost a gymnast who fought for her life – Lera Yuzvyak, who was basically our best gymnast, who dreamed of going to Tokyo, but ended up having to go to chemotherapy. Thank God, she is all healthy now, but this impacted severely the group.

For us, the year began in a very cruel, hard way and it shook us all because at first, we thought there’d be no European Championships, then we thought the Olympic Games would get canceled again. It seriously impacted all the gymnasts and at one point we were left without individuals, just the young ones, since Onopriienko missed a couple of months [of training], Pohranychna, who one day retires and the next is back training, also stopped for around 6-7 months. So I had to practically bring everyone back to gymnastics.

With Nikolchenko, who one day trains, the following doesn’t, it was exactly the same in this sense, but also because she’s the one who won the Olympic spot. The decision taken by the National Olympic Committee [of Ukraine] was very cruel regarding her and I think it wasn’t entirely correct.

First of all, as they explain, they acted according to the selection process. At that point, we had only selected Onopriienko, since during the National championships Vlada had COVID, she had a document for it, and I think that after the delay of a year and a half for the athletes, our great Olympic Champions [in the NOC] should have had a more professional approach towards the selection process. They just needed to listen to the coach. And a month and a half before our competition, they announced the two gymnasts that were selected, who are indeed good, they’re cute, they [perform] well, they work, they’re very hardworking, but they’re still little. They’re too young to fight, but the gymnast who was able to fight didn’t receive the support she needed, so this early decision kind of disheartened her. She tried, and tried, and tried, and tried, but….she didn’t do it till the end. Everyone kept telling her „You’re going“ because, in many teams, those who won the spots are the ones going [to Tokyo]. I also agree with this principle, but they didn’t hear us… It is what it is, we’ll strive, we’ll do the best to our abilities.

And I believe that– first of all, I love Tokyo very much, I’ve been there over 35 times, it’s almost like a hometown to me, even though we’ll be in the [Olympic] village for the first time–but I believe that even the fact that these games are being held is a win for the sport. After this year and a half hiatus, the fact that they gave the world of sports this chance is already a win.

On the group’s medal chances, since Ukraine happens to win individual Olympic medals every other OG.

ID: First of all, I can say we have a great group. And the fact that for the first time in 3 Olympics we’ll have a judge is already a feast. Secondly, in reality, not one judge can judge correctly and fairly a group routine right now, because currently, they watch, judge and study carefully the routines. They learn the whole routine so they can orientate. It’s impossible to calculate because something new happens every second. Especially when two different apparatuses are caught at the same time, in different parts of the carpet, it’s physically impossible for the eyes to see that. When it’s a single kind of apparatus, it’s a little easier. Whether we’ve managed to create a group that can do all that… well, we’ll strive for it, we’ll do everything. In reality, 8 groups are in the same situation – not one team has a greater [difficulty] score than any other, every team has calculated everything. We’re all in the same pot. It all depends on the execution, on how well you perform. Well, we’ll try.

On Yeva Meleschuk switching from individual to group

ID: You know, this turned out to be a great idea of mine. In the beginning, she was against it, but later I found she actually really enjoyed it. All in all, we have a very good group, who are still emotional, who are a little unsteady, and we need to find the balance in order to succeed.
As to the individuals, yes, I do believe that we should’ve sent one older gymnast and one younger – even though they have only half a year age difference, one of them is just much taller, and the other two smaller – in all, I think for the Olympics you need to be mature, to have matured, even though everyone grows at a different pace, but you need to really want it. Just like Anya [Rizatdinova] wanted it, Anya wanted it so much that her desire was visible on every fiber of her body.
When you do something with desire, you succeed. And the rest is just work, again and again.
You know, our sport is really unwoman-like. We need to spend the entire day in the gym hall. That’s why gymnasts tend to have a more manly nature because it’s very hard to withstand all of this. Even I can’t stand it at times. But I believe in the beauty of this sport, I believe that maybe one day we’ll have a normal Code of Points again because the code from Rio is 1000 times better than what we have now.
Moreover, this code actually „transformed“, a year ago it was still nothing [like now], but then the Russians read the code like this (turns her fan upside down) and decided to add throws in every collaboration. There are now a minimum of  30-35 throws in a routine. It’s impossible to watch this kind of routine – when they throw 2 or 3 apparatuses at the same time, it becomes impossible. We lose all composition, we lose the feeling to express. In a 2:30 routine, you need to put as much as you can, you need to be like Robocop. But you also need to perform all that and performing it becomes very hard (smirks). And spectators really just don’t understand it at all. I believe that the rules should be clear for spectators, fans, journalists, for everyone.

Anna Rizatdinova: This will be your 8th Olympics–

AR: Eleventh? That’s just unbelievable! Tell us, do you feel nervous or are the girls confident?

ID: You know, the hardest thing right now is to not forget anything for the trip, because we’re the last ones to leave.  We leave on the 30th [of July], we’ll have a couple of days of acclimatization. We have already switched our clocks and we live according to the Tokyo timezone. [The girls] wake up at 6, we didn’t manage to switch the time more accurately because the light during the day interferes.
There is excitement among the girls, but I am somehow very calm. I don’t know– I’ve always really wanted not only for us to win medals, but to make people fall in love with our girls because our kids are entirely different, our school is entirely different. Cause this Code allowed for [body elements] to be counted without any form, without any preparation, to perform something of a semi-circus, just some juggling stuff. All of this just killed gymnastics, yes, [it killed the aesthetic side of it], it’s just horrible. And, you know, during this whole COVID period, FIG selected coaches from 10 countries, among which was Ukraine, and we worked on the new Code, which was revealed yesterday. But there’s none of that left in it, just some crumbs, that’s why I don’t think this will be the last version of the Code. We’ll keep fighting this because right now it’s bad.

(Gestures to the monitor) They’re showing our hall, we have a 7.5m high [ceiling]. We’ve been in the Palace of Sports for the last 5 days, so we can throw [high], it’s 16m [high] there. Even though we have the possibility to test the [needed] amplitude, you can’t imagine how difficult it is to throw at 7 meters, and then at 16. I believe we’ve earned [a new gymnastics hall], our artistic and rhythmic gymnastics, if we count them together like in the FIG, we’re first among all other sports in the number of medals [we’ve won]. That’s why artistic and rhythmic gymnasts have earned to have a nice hall. (…) In Tokyo, we’ll try to do our best, and maybe a miracle could happen, I’m really hoping for a miracle.

Irina Deriugina: Vlada should have been selected for the Olympics was last modified: юли 31st, 2021 by Mariya Cherneva