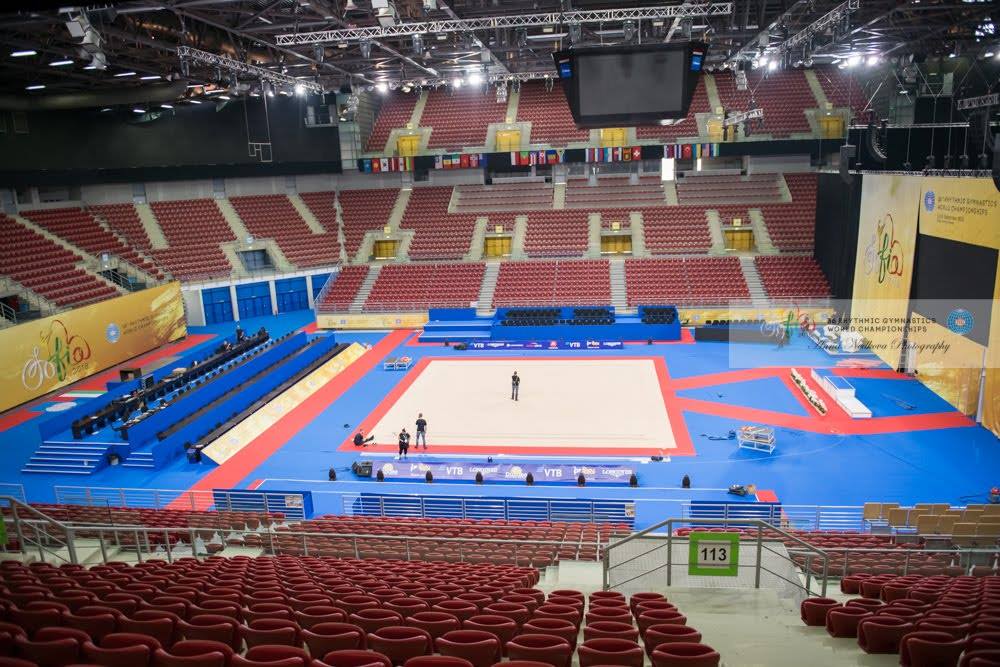 The 36th FIG Rhythmic Gymnastics World Championships has already started. We will follow the competition live from the Arena Armeec hall, while Longines and the FIG have provided livescoring on their respective sites here and here.

First on the carpet we saw Fanni Pigniczki from Hungrary. Also in the first group today we had the very strong team of Israel. Surpisingly the huge star Linoy Ashram had two drops with ball and just 17 points, outshined by Nicol Zelikman who received 18.950 and is currently in the lead. Newly transferred to Slovenia from Russia Ekaterina Vedeneeva did a wonderful routine with ball but received only 17.450. Rising star of the Spanish team Maria Año couldn’t present her beautiful hoop composition to the max and was scored 14.6. A wonderful crowd from Bosnia and Herzegovina has shown amazing support to their gymnasts, but as usual, the loudest are the Spanish fans who yell for everyone. Israel leads in the team qualification, followed by Poland and Hungary.

Starting with group B, we have Sanna Delbeke from Belgium with hoop to the tune of Michael Bublé’s “Feeling Good”. We’ll also enjoy presentations from the San Marino gymnasts with lovely music choices. Canada’s Sophie Crane begins with ball, led by legendary Bulgarian coach Dimitrichka Masleva, beautiful routine with only a slight hiccup at the end. Her teammate Katherine Uchida wows the audience with her pirouettes and gets loudly supported – and the judges agree – 16.700 with a 9.1 D score. Great composition as well from Veronika Hudis from Azerbaijan, also coached by a Bulgarian – Mariana Vasileva, but she finishes a second too late and will be penalized with a 0.05. Fellow countrywoman Darya Sorokina seems a little more confident but only gets 15.500. Crowd favorite Zohra Aghamirova is splendid and gets the second highest score on this apparatus – 17.9 with a 10.3 D. Korean gymnasts as usual were lovely to watch and made a lasting impression. USA gymnasts also start confidently with Camilla Feeley scoring a 17.1 in ball and Evita Griskenas a 16.200 with the same apparatus after missing out on some elements. Jouki Tikkanen wowed the fans with a lovely hoop to Sanja Ilic and Balkanika’s ever adored music receiving 16.000. Laura Zeng only continues the American girls’ progress scoring an impressive 18.500 for a Michael Jackson routine that the crowd absolutely loved and it puts team USA currently into second place. Gorgeous Rebecca Gergalo also did a nice job with the hoop, which was valued a 16.7. Bombastic team Russia scores 3 routines above 20, with Sasha Soldatova in the lead thanks to a marvelous 20.250, a tenth behind each are the twins Dina and Arina Averina respectfully. A great addition to a great tournament so far was the presence of the North Korean gymnast Pak Jin A, who was a pleasure to watch.

Group C starts with the Belarussian stars, first of which is Julia Evchik, who does a great job and is scored 18.650. Nastia Salos and Katia Galkina though don’t have the same luck and after a music mishap, Salos drops her hoop and the chance to be in the final. Same goes for Galkina, who loses her balance at the penche and after a bad throw at a risk loses the apparatus and finishes with an AD after the music, which will be penalized by the E1-2 judges. Still she gets 17.400 and is in front of Salos. Salome Pazhava is warmly welcomed but that doesn’t help her stay focused during her sensual routine and with a drop she receives 16.450.