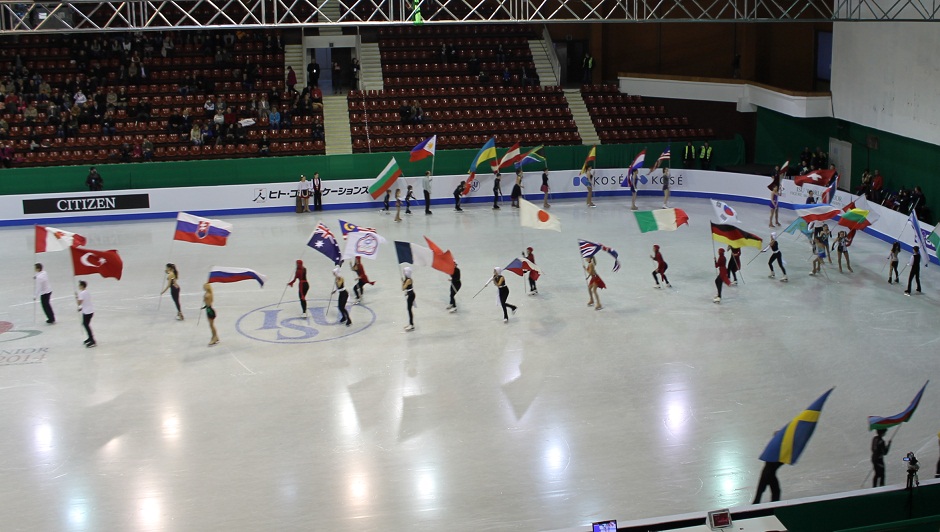 2014 World Junior Figure Skating Championships was openned officially with a touching ceremony. At Bulgarian folk music we showed that even without facilities and many skaters can do such shows if we want to.

On the ice we saw kids with folklore garbs, two boys were wearing bagpipes, girls came with jug, bread and salt as requires the tradition for welcoming guests.  The parade of flags went according to plan, then skaters showed great program on folk music, which ended with the traditional dance ratchenitsa. Despite minor inaccuracies the impression of synchronized skating is very good.

The guests were welcomed by Tatyana Yordanova – Chairman of the Bulgarian Skating Federation and the Second Deputy Minister of Sports Jordan Iovchev . On behalf of the International Skating Union speech was delivered  Mrs Phyllis Howard. The opening was attended by Bulgaria’s most successful individual athlete in ice sports Evgenia Radanova.

“Dear skaters, guests from the Bulgarian Skating Federation I welcome you to the Championship. I would like to thank ISU for the trust in us and for allowing us to host this prestigious competition. This is celebration of the triumph of the young skaters and hope that your hearts will be won by the beautiful programs”, Mrs Yordanova said.

“This is one of the biggest ISU competitions this season as number of participants. I would like to thank Bulgarian federation for taking the risk and the responsibility to organize this huge event. This skaters are the future of figure skating”,  Mrs Howard added.

Junior Wolrds in Sofia was opened with touching ceremony and folklore motives was last modified: януари 2nd, 2018 by viya