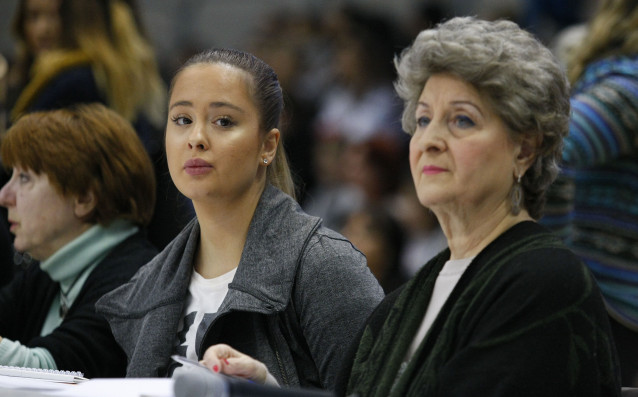 Olympic bronze medalist and World Champion with the Bulgarian rhythmic group Hristiana Todorova will be Bulgaria’s candidate for member of the RG Technical Committee at the governing elections, which are supposed to take place in October, during the 83rd FIG annual congress. This was announced by BGF’s president Krasimir Dunev in an interview with the Bulgarian National Radio. Currently, Bulgaria is represented in the TC by Mariya Gigova, the first 3-time World Champion in the sport, who has served several terms as both member and president of the Committee between 1978 and now. Most recently, 73-year old Gigova and fellow TC member Shihoko Sekita (JPN) were allegedly removed from supervising the 37th World Championships in Baku last fall, for not being able to “keep up” with the judging. In 2013, Gigova and 5 of her colleagues were sanctioned with removal from their duties in the TC, after manipulating results from courses for referees. The accusations involved granting diplomas without adhering to the rules of the FIG.

Fans have often criticized Gigova for not being vocal enough on issues regarding the judging of the sport and its development, as well as for not defending her own country’s interests in rhythmic.

Hristiana Todorova, who is currently a brevet judge, was 8 votes short of becoming FIG’s Athletes’ representative for RG, back in the summer of 2017. The position was ultimately won by Liubou Cherkashyna (BLR). Todorova has in her collection 81 medals from World Cups, European and World Championships, won during the 8 years on the senior national group, among which an All-Around World title in 2014, a 3+2 gold medal from the 2011 Worlds and a 10 clubs European title. Her biggest achievement came in 2016, where she and her teammates won bronze at the Rio de Janeiro Summer Olympics. Todorova was suppoed to be head-judge of the now postponed World Cup in Sofia (Bulgaria).

While it’s still unclear whether the Congress and the accompanying elections will be held in October as planned, member federations are still invited to send in their candidatures by May 20th 2020. A final decision on this matter is to be taken on the 15th of June.