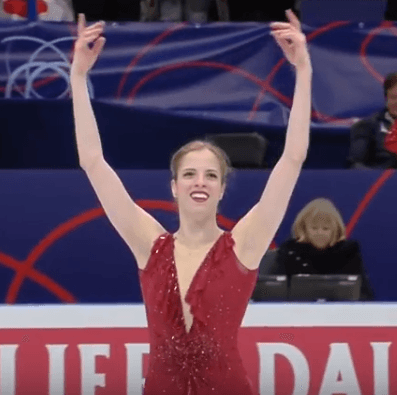 Carolina Kostner did amazinag short program at ISU World Figure Skating Championships in Milan (Italy). With PCS world record she won the first competition leaving behing her the Olympic champion Alina Zagitova. Carolina raised the crowd with her amazing performance and could not leave the ice due to the applauses. Probably this is her last competition, and it is in Italy. Second and third are Zagitova (Russia) and Satoko Miyahara (Japan). The winner of the last two seasons Evgenia Medvedeva did not start because of injury.

Carolina was brilliant in her performance on music by Celine Dion and gathered 80.27 points by raising her best score by almost two point. The limit of 80 points for a short program so far has been passed only by Zagitova and Medvedeva. Kostner received the highest component score in history – 38.97 points (Medvedeva had 38.42 from the Olympics). In the weeks before the competition she returned to work with Alexei Mishin and her jumps were very solid if we compare then to her Olympic performance. The triple flip-triple toeloop combination, triple loop and double axel were almost perfect and took bonuses from the judges. Without surprise the spins and spets received a level of difficulty 4.

The Olympic champion Zagitova is still favourite for the title with 79.51 points.  She showed an old weakness and was not perfect in a short program. In fact, it was close to the perfect and there was only slight mistake in the very complex combination of a triple lutz with a triple loop.

The combination was also the problem of medalist from 2015 Satoko Miyahara, who is a third third with 74.36 points. Two points behind her is the Olympic medalist Kaetlyn Osmond (Canada). In top 8 are also Maria Sotskova (Russia), Gabrielle Daleman (Canada), Bradie Tennell (USA)and Wakaba Higuchi (Japan).