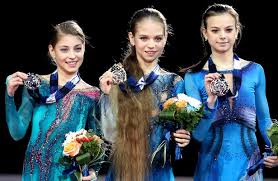 Russia won five of the six possible medals in women and ice dance in the Junior Grand Prix at Nagoya (Japan).

Three girls of Eteri Tutberidze’s group stepped on the podium. Alexandra Trosova won the gold with 205.61 points – expected but not easy. She finished first in the short program and second in the free, where she felt on a quad salchow. Second with 204.58 is Alena Kostornaya and third is Anastasia Tarakanova – 199.64.

In ice dancing the medalist has been preserved since the first day. The title is for Anastasia Skoptcova and Kiril Aleshin with 153.61 points. Americans Christina Carreira and Anthony Ponomarenko were second with 151.76, while third are Sofia Polishchuk and Alexander Vakhnov. Podomarenko is also of Russian origin – he is the son of the legends Marina Klimova and Sergey Ponomarenko.

Russia with five medals in girls and dances at the Grand Prix Final was last modified: декември 11th, 2017 by viya